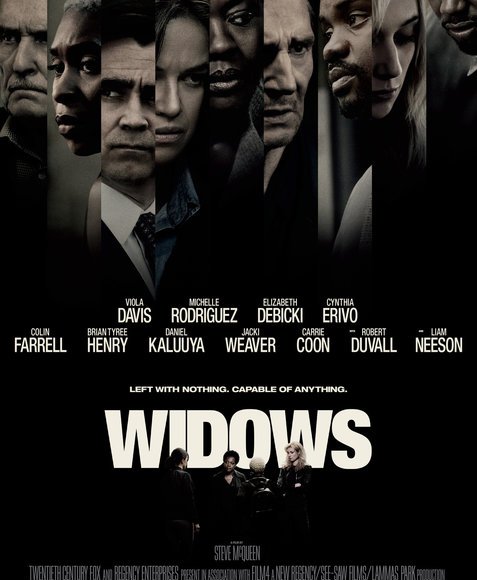 From director Steve McQueen comes the heist film Widows, based on a 1980s TV series of the same name. Wait did I hear you correctly, Steve McQueen – the man behind intense, hard hitting and politically charged films like 12 Years a Slave, Shame and Hunger – has done something decidedly Blockbuster-esque? Well yes but with McQueen like levels of gravitas.

The opening scene is certainly blockbuster worthy, a highly entertaining sequence in which we follow four men on a heist that takes an explosive and rather deadly turn. It turns out those four chaps were married and Veronica (Viola Davis), wife of gang leader Harry Rawlings (Liam Neeson) decides to take on his next job, persuading fellow widows Linda Perelli (Michelle Rodriguez) and Alice Gunner (Elizabeth Debicki) to get involved, with Belle (Cynthia Arivo) joining later.

All of this is happening in Chicago at the same time as a local election, with Jamal Manning (Bryan Tyree Henry) up against Jack Mulligan (Colin Farrell), the political equivalent of David versus Goliath. Jamal is helped out by his brother Jatemme (Daniel Kaluya), both of whom have a chequered past. The planning for the heist takes place alongside all the usual fake smiles, empty promises and general skulduggery that surrounds politics.

Whilst it may technically be a heist, it is more of a drama. The main focus of the film is the widows, their old relationships, their lives and how they deal with grief. Alongside this we get an inside look into the grimy world of politics, and the money, underhand deals, racism and sexism that goes on within. This is a brilliantly executed and very moving look into both worlds, the rich and the poor, the powerful and the powerless. Like so many of McQueen’s other films, he shines a light on the problems blighting America today.

As usual Viola Davis gives a stellar performance as the grief stricken and strong willed widow, as does Michelle Rodriguez in a role that is poles apart away from Letty and the world of Fast and Furious. Colin Farrell is excellent as the slimy career politician and Daniel Kaluya is fierce, his character is downright frightening. Mind you it does feel unfair to single out individual performances as every one of this large and star-studded cast puts their best foot forward. Although like in Baby Driver Jon Bernthal, who plays Alice’s husband Florek, is criminally underused – have directors not seen Daredevil or The Punisher?

As the film is centred on weighty issues such as love, loss, grief, crime and racism it is not your average heist flick – its overall lack of pace matches its seriousness. As the majority of the film is slowly drawn out heist planning or electioneering not much in the way of action or spectacle happens. Whilst this does get trying at times be patient and you are rewarded with a terrifically moving drama with a thrilling and increasingly violent climax.