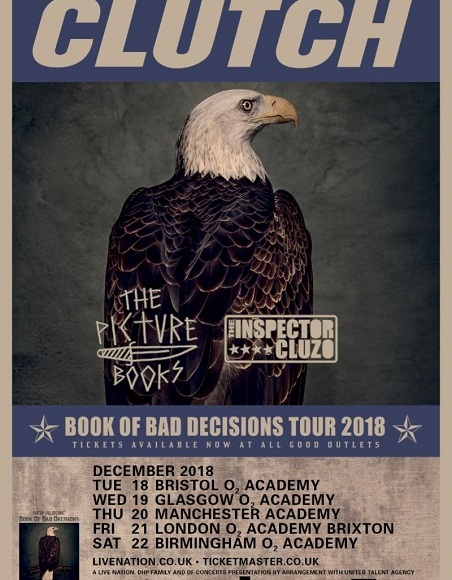 Clutch albums are never anything but great and, as expected, this dedication to no nonsense, top quality Rock n Roll translates rather well to the stage. Starting the night at the quickly filling Brixton Academy were two European double acts, the French The Inspector Cluzo and the German The Picturebooks.

Against a backdrop of Miguel the goat The Inspector Cluzo put on an energetic and politically charged performance, with rallying cries against global warming, paeans to farm life in ‘We The People of the Soil’ and the raucous chants of “for my family” in ‘Fisherman’. Their impressive lust for life culminated in the lead singer Malcolm Lacrouts attacking the drum kit, leaving just a snare, upturned bass drum and a very grateful audience.

The Picturebooks kept the passion and energy levels sky high with big riffs and a truly enormous drum sound. Seriously I cannot state enough how huge the drums were, if I was not there I would assume studio trickery was afoot. They served up powerful rock full of hooky, chant along nuggets such as the defiant‘ Zero Fucks Given’, the southern rock flavoured ‘I Need That Oooh’ and the massive ‘Your Kisses Burn Like Fire’.

These two hyperactive European double acts were the perfect warm up for the main attraction, the all American pure rock fury of Clutch. Furious it certainly was as Neil Fallon, Tim Suit, Dan Maines and Jean-Paul Gaster ripped through their banger infested set with gusto. A set neatly balanced between new and old material, with the likes of ‘H.B. is in Control’, ‘Ghoul Wrangler’, ‘Emily Dickinson’ and the infectiously funky ‘In Walks Barbarella’ representing their mighty fine new album Book of Bad Decisions.

Their relentless, runaway train like force went undimmed throughout, with belters such as ‘X-Ray Visions’, ‘Crucial Velocity’ and ‘Earth Rocker’ whipping the crowd into a frenzy. This was certainly the case front and centre where, amongst the hustle and bustle, I very quickly regretted my decision to wear my glasses. Anyhoo whilst there was very little crowd interaction it was such an adrenaline fueled two hours that no one cared one jot and with the encores one-two punch of ‘Electric Worry’ and ‘How to Shake Hands’ they were off.

I may have been deaf for the following two days but boy was it worth it.