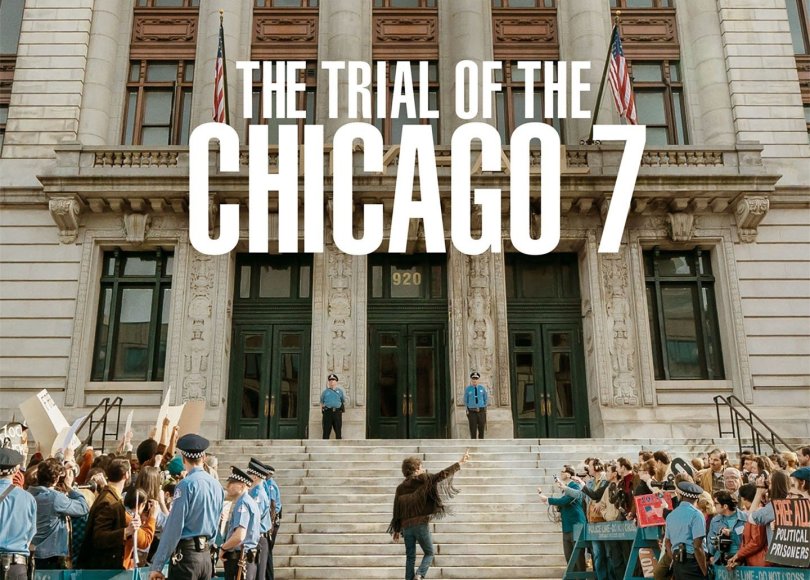 Originally written in 2007 with Steven Speilberg to direct, after 13 years of delays the writer Aaron Sorkin turned to himself to direct. The man behind TVs West Wing and writer of The Social Network has created a very watchable historical legal drama about the trial of the chicago 7 (8 including Bobby Seale) after the riots at the 1968 Democratic National Convention.

It lurches from the courtroom to flashbacks of the riots, the people, and the organisations they are part of, all the while reminding us of the deadly thread that binds them all together – the Vietnam War. Context is provided but the main theatre for the action is the courtroom, with the power of the state and the newly elected Nixon exerting their force on this rag tag bunch of leftists. They use the best lawyers at hand and every underhand tactic to try and discredit them and the anti war movement.

Theatre is the right word as this is an engaging but showy courtroom piece that is a little too self important and self righteous. It is fast paced, with great quips, speeches and acting but too glossy and Hollywood like given the subject matter and the modern parallels. It is a crowd pleaser that will no doubt do well at the oscars, full of politics, emotive speeches, finger wagging and gavel banging. As well as some genuinely moving, tough to watch scenes in amongst the gloss; police brutality and the treatment of black panther member Bobby Seale in particular.

One thing that stands out is the ensemble cast which features – deep breath – Sacha Baron Coren, Jeremy Strong, Eddie Redmayne, Alex Sharp, John Carroll Lynch, Noah Robbins, Daniel Flaherty and Yahya Abdul-Mateen II as the eight on trail. As well as William Kunster and Ben Shenkmen as their lawyers, Joseph Gordon-Levitt and John Charles MacKenzie as the prosecutors, Frank Langella as the Judge and Michael Keaton as the ex attorney general of the U.S.

All put in brilliant performances, adding to the charged and at times comic atmosphere. Sacha Baron Cohen is in his element as the comedic, counter culture hippy Abbie Hoffman. Yahya Abdul-Mateen’s defiant and increasingly frustrated black panther Bobby Seale is captivating and deserves a bigger focus. Joseph Gordon-Levitt is as reliable as ever, as is the evergreen Michael Keaton. Frank Langella plays the cantankerous and prejudiced judge Harris with aplomb, handing out withering looks and contempt of court charges like they are going out of fashion.

Fast paced and witty, this political and emotionally charged drama is engaging and packed with great performances but is too glossy, Hollywoodised and self important.