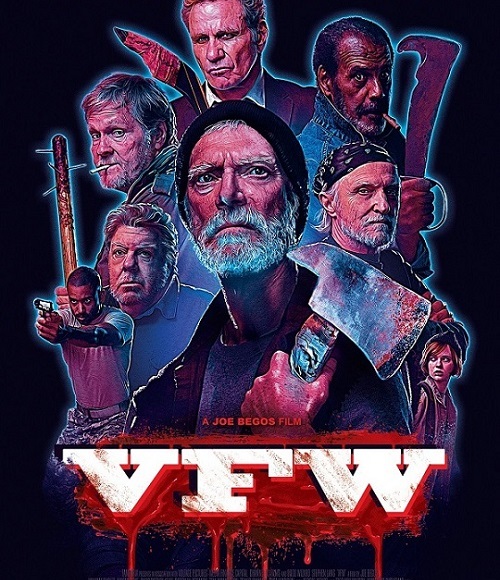 Released in America last year and in the UK in june to next to no fanfare is VFW. Directed by Joe Begos VFW is a gory, splatter and action filled horror film. This new drug hype is sweeping through this small American town, turning it into a lawless haven for criminals, thugs and ne’er do wells. Next door to an epicentre of all things hype is VFW, Veterans of Foreign Wars, a bar where ex soldiers hang out and their drunken reverie is broken when young buck Lizard barges in on the run from drug crazed thugs.

All out war follows in his throwback flick that is in love with slasher films and John Carpenter – from its violent premise to the cold and creepy synth soundtrack. It is ridden with cliches and in hock to well worn genre tropes, but it makes up for this with fast paced, in your face entertainment and a tangible sense of camaraderie. Heads are pulverised, arms are severed and legs are hacked off with a variety of weapons – handguns, shotguns, spikes, axes, swords and chainsaws to name but a few. At one point someone’s head is used as a battering ram, this flick is not for the squeamish.

The over the top, at times mind numbing violence is counterbalanced by the characters. It is a disparate bunch held together by the surly general of a barman Fred, as played by Stephen Lang (Avatar, Don’t Breath), who has quite the birthday. A group which includes the barfly Thomas (George Wendt – Cheers), sourpuss Abe (Fred Williamson – From Dusk Till Dawn), used car salesmen Lou with the gift of the gab (Martin Kove – Karate Kid), the story loving Walter who just wanted to go to a strip club (William Sadler – Shawshank Redemption) and the medicated oldie amongst oldies Doug (David Patrick Kelly – The Warriors). Not forgetting Sierra McCormick’s irrepressibly rough and tumble Lizard and the just off duty soldier Shaun (Tom WIlliamson), who only popped in for one.

A brutal 90 minutes of entertainment that while stuffed with cliches and veering dangerously close to inane, is riotous, blood splattered fun that is refreshingly old school.