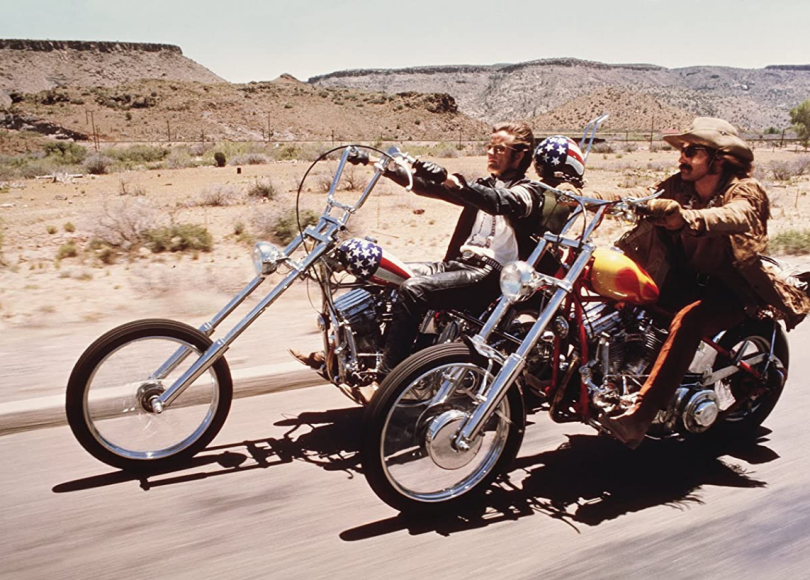 Released in 1969, when Richard Nixon was president, man walked on the moon, the Vietnam war was still raging, and Woodstock happened, is Easy Rider – the latest classic revisited. A social commentary on 1960s America, told via two motorbike riding hippies – Wyatt and Billy – on a journey to Mardi Gras after a succesful drugs deal. It tells the tale of the counterculture in 1960s America, their alternative ways of living, desire for freedom, fondness of narcotics and the hatred and bile that came their way.

The focus is on Wyatt (Peter Fonda) and Billy’s (Dennis Hopper, who also directed) journey, and the people and places they meet along the way. It has no overarching plot and is episodic in nature, with lots of varied, eclectic and oft-times strange sequences played out one after the other. This episodic nature, the choppy cuts between scenes, the ad libbed and stoned dialogue, and an open and frank portrayal of drugs gives a loose and natural feel to the film unlike anything else at the time. The cost of this method though is a meandering, lackadaisical, and disjointed flick – the weird and unfathomable LSD scene near the end hammers this home.

Alongside this though is one hell of a soundtrack, including Steppenwolf, Jimi Hendrix, The Byrds, and The Band. Like The Graduate two years before, Easy Rider was one of the first to use pop music for its soundtrack. Classics like ‘Born to Be Wild’ (Steppenwolf), ‘The Weight’ (The Band) and ‘If 6 Was 9’ (Jimi Hendrix) help the film flow, add to the atmosphere and emphasize the topics of discussion.

Along the way Wyatt and Billy pick up George Hanson, an drunken young lawyer wonderfully played by a fresh faced Jack Nicholson. Straining at parental expectations and his hometown, he wants to escape his restraints and dive head first into whisky drenched hedonism. Peter Fonda and Dennis Hopper were at ease with their roles, possibly helped by the fact that the spliffs smoked on screen were real.

For many this film documents the death of the 60s. Encapsulating a period in time and providing a snapshot of society, of people trying to be free and find their own path in spite of the ever mounting obstacles and growing sense of hopelessness. Whilst it was fresh and daring in its day, it is now a dated, meandering hodgepodge of quick cuts, hippies, stoned ‘insights’ and rednecks. A film whose reputation and legacy is greater than its contents.