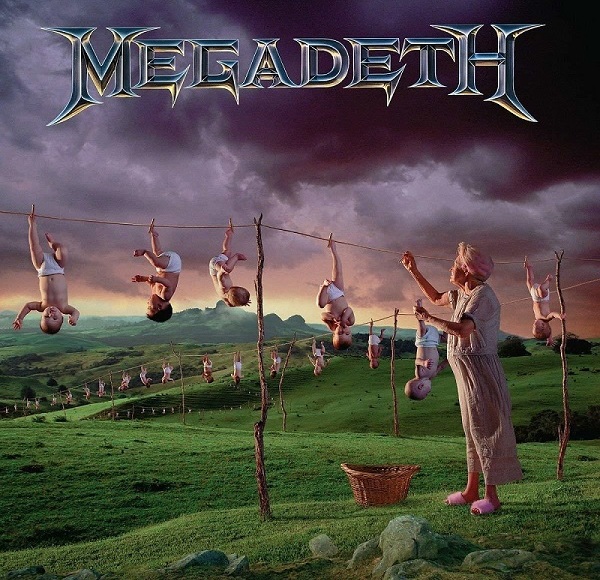 Megadeth, metal icons and one of the big four of Thrash (alongside Metallica, Anthrax and Slayer), are back with a new album The Sick, The Dying… and the Dead!. It is their 16th record, coming six years after the grammy nominated return to form Dystopia, and is out today. So in celebration of this here is a countdown of their five best offerings – good place for newbies to start or fans to argue.

5. Youthanasia – This, their sixth album, continued in the vein of its successful predecessor Countdown to Extinction by dialling down the thrash and focusing on the hooks. They replicated the formula with great results, including the locomotive riffing of ‘Train of Consequences’ and the distilled menace of ‘Family Tree’. The soaring rock melodies and biblical references of ‘Elysian Fields’ and the marching pace and joyful anger of the title track. It is a lyrically diverse record, with religion, gambling, domestic and sexual abuse, losing someone, life on the road and death covered. The latter in the atypical but beautiful ballad ‘A Tout Le Monde’, which caused controversy at the time as it was perceived as being pro suicide.

4. Countdown to Extinction – Metallica’s enormous commercial success with The Black Album in 1991 inspired other heavy metal bands to smooth the rough edges of their sound. In stepped Megadeth a year later with Countdown to Extinction – who incorporated melody and more typical, hard rock structures to great effect. From the tight groove and momentous riff of ‘Symphony of Destruction’ to the psychotically catchy ode to Dave Mustaine‘s schizophrenia ‘Sweating Bullets’ – Deth’s fifth album achieved radio friendly results without losing any of their trademark anger and brutality. The heavy stomp and sweet melodies of ‘This Was My Life’ and the controlled aggression and big chorus of the title track, with its environmental concerns, further prove this. Fun fact, it was stopped topping the US charts by the Billy Ray Cyrus album (Some Gave All ) that gave you the musical herpes ‘Achy Breaky Heart’.

3. Peace Sells… but Who’s Buying? – Deth’s second album, coming a year after their decent but poorly produced debut Killing Is My Business… and Business Is Good, and the one that made them who they are. Peace Sells… but Who’s Buying is brimming with venom, with brutal tracks covering the usual array of dark topics like black magic, the devil, murder, satanism and war. The former in the moody ‘The Conjuring, disillusionment in the title track which boasts one of the most memorable basslines in metal. Murder in the breakneck speed of ‘Good Mourning/Black Friday’ and satanism in ‘Bad Omen’ replete with a lightning fast solo. It all ends on the brutal, Russian roulette headbanger ‘My Last Words’, with its sprightly riffing and nimble bass.

2. Endgame – 10 years after the awful Risk in 1999, and the 3 middling to decent albums that followed, came Endgame. Dave and co were back making pissed off thrash metal, with this ferocious 44 minutes their first truly great album since 1994. You are greeted with foot to the floor aggression from the start, with the furious instrumental ‘Dialectic Chaos’ and the brutal, battle hardened follow up ‘This Day We Fight’. From the rage of ‘Bite The Hand’, the pummeling riffage of ‘Bodies’ and the hefty ‘Head Crusher’ Deth stuck to their strengths and created a well honed slab of heavy metal. The rich, burly sound hammers it all home, with the masterful Andy Sneap helping on that front – whose recent work includes Judas Priest, Saxon and Testament.

1. Rust in Peace – It could be no other. Released in 1990, Rust in Peace is a thrash masterpiece that finally brought them into the big time. It starts off with the prog tinged ‘Holy Wars… The Punishment Due’, perhaps one of their best tracks and inspired by religious conflict and the marvel comic The Punisher. There is not a duff track here, as every second of its 40 minute runtime is utilised – from the blistering Dave Mustaine and Marty Friedman guitar solos of ‘Hangar 18’ to the pissed off, anti war number ‘Take No Prisoners’ – with Nick Menza’s barrelling drum beat a particular highlight. The best candidate for a skippable track is the spoken word nuclear holocaust warning ‘Dawn Patrol’, but then is followed by the finale ‘Rust In Peace… Polaris’ so all is forgiven. A great album, not just a great thrash album.